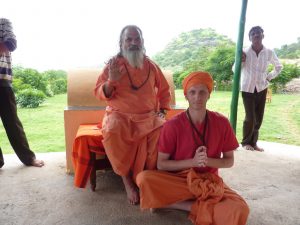 Hatha Yogi’s tradition is a tradition based on continuity of policy. Parampara denotes asuccession from a teacher to a disciple and in origins it started from Matsyendranath. Parampara tradition allowed many yogis to appear and till now enriches Sampradaya tradition. Yogi Nath tradition is well known by its concentration in Hatha Yoga, but it is not the only thing that makes Nath Sampradaya abundant. Yogis attained self-realization by practicing various forms of yoga. The knowledge had been stored, kept and transmitted in accordance to the continuity of policy – from Guru to a disciple – during the whole history of Sampradaya tradition existence. It should be emphasized that Yogi Nath tradition is a tradition of initiations. It means that yogi’s development may be possible only trough initiation (Deeksha) given by Guru. Deeksha is a principal difference between disciple and just curious person. Only passing through certain types of initiations a yogi strengthens himself in following the Path of the Tradition.In a formal way Deeksha is a ceremony with mantras and various attributes using; as a matter of fact, however, the process possesses a deep mystic nature. By initiating and giving oral guidance Guru provides to disciple his spiritual power as he remains mediator to energy and experience of Sampradaya. Guru transmits not only some information, he carries out the transmission of new sanskaras, characteristics that renew and correct disciple’s consciousness and deeper layers of perception.  In Hindu and Sanskrit the word “Sanskara” means correction, improvement, influence, correctness and completeness”. At this point the disciple’s process of transformation starts. Sanskaras which were transmitted in Nath Tradition aids the consciousness in formation new yogi way of life and and yogi thinking. They include the process of constant adjustment by invisible power of Guru and the whole Samparadya. The process itself begins from anushthana (the specific time for adopting the initiation which can last 21, 40, 51 and 100 days) and goes on continuously, certainly on condition that disciple supports and develops the path of learning constantly.

For initiated person deeksha reveals new possibilities for self-development. Having been accompanied by proper guidance and regular practicing of Sadhana (spiritual practice in which different methods of consciousness development and awakening are unified), the spiritual power of Sampradaya becomes a priceless support for dikshit (a person who was initiated). The attributes which were received during deeksha ceremony are not only signs of belonging to the Nath Tradition, but they are mystical instruments which keep the invisible connection between Guru and Sampradaya. Like all the practices these attributes symbolizes concepts which yoga is based on.

Every day dikshit reads a mantra for each of attribute, establishing a connection with it between him and Guru and the Tradition. Every attribute is sacred; it should not be lost and must not be replaced by Guru’s permission.

In accordance to disciple’s self-development and way of life five types of deeksha can be transmitted in Nath Sampradaya Tradition: Choti deeksha, Chira one, Upadesh, Langot and Bhabhut deeksha.

Choti deeksha is transmitted to a disciple: a black cord (janeu) is consisted of 6 cords with five attached items on it. They symbolize elements of Earth, Water, Fire, Air and Ether. These components are contained in energy structure of human being and indicate the belonging to Nath Tradition. It is the first deeksha received by disciple after trial period which is set by Guru.

Further the order of initiations can be different. Many points depend on disciple’s inner reasons and Guru’s opinion mainly. Chira-deeksha and Upadesh-deeksha possess a particular meaning. Chira-deeksha is transmitted to that one who is firmly convinced of his choice to follow Yoga path. The initiation of Chira-deeksha is a process when the middle of ear cartilage is cut and earrings (kundalas) are put through new holes. The cut is made in a specific way and should pass through two points – upper one and lower one – they are connected to the activity centers of vital power and consciousness. A round earring means space that shaped in a certain form, or Shiva and Shakti.  Chira-deeksha is a fundamental in Nath Yogis’ Tradition. Having put on the kundalas the initiated person becomes a member of the Order and actually can be a Guru for those is not sure in his choice yet.

Upadesh-deeksha is transmitted as a form of worship to Shakti and accomplished by leaving and non-attachment to illusions and any ties. Actually, Upadesh-deeksha is a tantric experience and for Naths it is a significant element of Sadhana. Chira-deeksha and Upadesh-deeksha are derived from the story about Shiva’s wife (Supreme God in some branches of metaphysic teachings of Hindustan) Parvati that fell asleep and missed her divine husband’s precept who was telling about the knowledge of liberation. But being close by Shiva (exactly saying in fish stomach) Matsyendranath (one of the founders of Nath Tradition) overheard him. Having found that the Knowledge was heard by a human being Shiva became furious and tried to kill Matsyendranath by his trident, but he succeeded to dodge twice, Shiva could pierce his ears. Shiva saw that Matsyendranath either succeeded to listen to all of his words up to the end or was quite agile, and understood that apparently it was a sign and the times came to transfer the knowledge to people as well. Then he put the kundalas into Matsyendranath’s ears and blessed him as a yogi. Parvati was very angry that the knowledge of liberation was transferred to people; however in order to propitiate her Matsyendranath promised Parvati that everyone keeping the yoga path would worship her also. Since then the tradition of kundalas transmission and worship to Shakti aspects originated.

Langot-deeksha – is a transmission of a piece of cloth which is tied in a particular way and worn like underwear, it helps in energy gaining and spreading.

The last one, bhabhut-deeksha, is a practice of covering naked body by ashes and maintaining tapas for 40 days. This initiation is intended for those who plan to leave the society and practice an ascetic way of life.

The ceremony of initiation is a very delicate and deep process and every disciple should approach to it with full responsibility and willingness to carry any commitments set by Guru. Dikshit promises never to give up his choice and always will be devoted to his Guru and Parampara of teachers. It is important to understand that deeksha is not given for a month or a year, it is something sacred and given for the whole rest life, and acquired sanskaras should be developed along yogi’s path.