The Origin of the Universe Theory 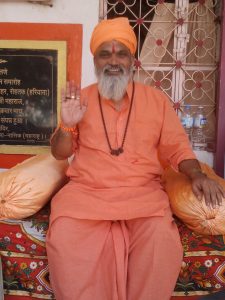 From the Nath Sampradaya point of view, the prime cause of the Universe is the Omkara (the prime sound, the origin of everything), manifested in the three gunas: rajas, sattva and tamas. Adinath, the first Guru of the Nath Sampradaya, exists as the Omkara and as the Supreme God. He is Brahma as the Rajas swarupa (the creative force) and his avatar (the incarnation of a deity in a human body) is Satyanath. He is Vishnu as the satva swarupa (the conserving force) and his avatar is Santoshnath. He is tamas as the Rudra swarupa (the destructive force) and his avatar is Rudranath. Thus, the Omkara is the manifestation of the elements of akasha tattva (space), vayu tattva (air), tejas tattva (fire), jala tattva (water), prithvi tattva (earth), from which all matter in the Universe is made of, including the Sun, the Moon, the planets, the constellations, the countless number of stars and other forms of life. The Siddhanta (conclusion, derivation) claims that the akasha rupa is the diversity of Vishnu, and the jala rupa is the reflection of Brahma.The origin of the Universe became possible with the involvement of the Divine force, first the Nidja-shakti (the creative energy), then the more subtle Apara-shakti and Kundalini created other forms of energy. In other words, with the properties of Omkara and Shakti and the participation of Brahma’s creative force, four forms of life were born. It is the 18 kinds of plants. Then, the countless forms of the micro and macro world, born from sweat, including the diversity of insects. Then, the oviparous animals, those that lay eggs, namely the birds, reptiles, fish and amphibians. The fourth form of birth was of those carried in the womb, the life birth of the viviparous animals, the male and the female.

Simultaneously with the appearance of those four forms the first evolutionary process had started. It was possible due to processes of  a very subtle nature, but they had lead to changes in all life forms of the micro and macro cosmos. Thus, precisely the Divine abstract was the cause of the creation of all gross forms and the genesis of the human kind. It is the Spirit and the gross form — jivatma (individual soul), or the genuine Omkara in existence as rajas, sattva and tamas.

Every primordial Omkara is located in the sahasrara chakra, which we call the place of the divine power. The power of rajas-rupa Brahma is located in the swadhishthana chakra. The power of sattva-rupa Vishnu is in the glowing of manipura chakra. Tamas-rupa Rudra is in the heart, the anahata chakra. The knowledge of Gorakshanath rupa and the glowing seed of Shakti — is also in the sahasrara chakra.

In other words, the reason of Creation of the subtle and gross forms, i.e the Paramatma (The highest transcendental «I» or the Absolute Reality) and the Atma (the individual soul, which is identified with the body), and also the reason of forms of Paramatma is energy, which pervades the kingdom of Brahmanda (The Universe). That is to say, the Paramashakti (the Highest Energy) has become the universal reason of Creation and transformation of atoms, smallest particles and light, which became the source of all life forms in the Universe, the nature of five tattvas (elements) and the magnetic field. The Power of the Highest Reality is manifested in the three gunas from the Eternal Light of Omkara: sattva-guna (satya — truth), which is of the yellow color, rajas-guna (manas — mind) which glimmers in the color of blue and tamas-guna (chitta — consciousness), which light features the color of red. Thus, the sukshma-sharira (the subtle body) became derivative from the karana-sharira (the causal body). This subtlest of bodies is the highest Ishvara of the manifested Shakti as the yellow, blue and red colors in the body of Prakasha (Transcendental light), as jyoti swarupa with the following formation of the subtle body. Thereby, the subtle body is a kind of template of the jyoti swarupa, with the same qualities as the universal powers, namely the three gunas — rajas, sattva and tamas. Those rays of light are like the door to Atma, the mind and consciousness. The merging of the subtle and causal body subsequently reveals the gross physical body. Thus the human kind was born, endowed with five sensory qualities of perception.

In the early times the created human beings, both male and female, were inclined to violence, their only purpose was the idea of feeding. But in the process of time the shifting habitat conditions has given rise to the development of intellectual abilities. The development of intelligence determined more complex mental abilities, and gradually spiritual growth. A lot of sacrifices have been made before the religious laws were developed, before the properties and consequences of human deeds, the cause and effect of the reincarnation process were discovered. The supreme goal of one’s birth became the achievement of highest states of the divine power. Later on, some individuals stood out among the others, many scientists, rishis, muni, yogi, sadhu, saints — all residing in the highest state of comprehending Śhunya (the Emptiness) and the Supreme Knowledge. Eventually, the yoga sadhana was developed by the mahatmas through reasoning, knowledge and experience, which had evolved in the environment of muni, rishi, sanyasins, tapasvins, ascetics and yogis. Then the followers of yoga among the 84 siddhas proposed a theory of the initial genesis of the Universe and the development of human beings, animals and other life forms. In particular, Guru Gorakshanath opened the door to the supreme truth and showed the way to perfection through yoga sadhana and his perceived experience. Subsequently, the siddhanta’s knowledge evolved and reached our days through the practice of parampara.

The Body of the Universe

The primordial Satguru (the highest guru), the Natha yogis and particularly Guru Gorakshanath through continuos contemplation have created eternal truths of the Divine origin of the beginningless Universe, full of wonders and constant motion, which is in absolute self-control and balance. Thus, the primary factor of the Universe’s origin is the Nijashakti (the creative force of the Absolute), which generates Para-apara-sukshma and Kundalini as qualities of energies, emerging in the unity of the body of Saguna-sakara Parameshvari and Parapinda.

Due to the nature of Parapinda:

— Aparampara-guna — as the result of the Shakti’s pulsation: immaculacy, incomparability, infinity, formlessness, the unmanifested and other qualities.

— Niranjan — is the dwelling in true unanimity, attentiveness, omnipresence.

Thus, the Parapinda leads to eternal objects, namely the supreme bliss, awakening, awakening of consciousness, transcendental light and to the So-Ham of all gunas. And from those eternal and permanent objects occurs the body itself.

Thus, the five elements create different levels of awareness, presented as the faces of deities. It is Shiva (Adinath), Bhayravanath, Kanthanath, Sadashiva, Ishvara, Rudra, Vishnu, Brahma. This leads to the creation of Parkriti-Pinda (the prime cause of the world of objects, their material basis) and the four primary forms of birth of the living beings (as described above).

Rajas, Satva, Tamas, the qualities of the five elements, as well as the Moon, the Sun and the stars — all constitute the Prakriti-pinda.

The five elements of the human body:

Five qualities of the personality

Action — mindfulness, diligence, activity, confidence, following the rules and foundations of the community to which you belong.

Speech — speech that is manifested in the higher consciousness, speech as the object of perception, thought-form, audible speech, recorded speech.

The passage above is about the properties of elements that create male and female bodies in the womb of the mother.

The disposition of the Vayu.

Prana — is in the heart, it generates the inhale and exhale.

Apana — is in the area of the anus.

Samana — the area of the nabhi. The digestion activity.

Udana — The area of the throat. Balance.

Vyana — the circulation of blood and balance.

Lurma-vayu — the movement of the eyelids.

Devatta-vayu — provides the state of peace and yawning.

Dhanandjaya-vayu — provides sound in the organism.

10 doors of our organism.

Two nostrils, two eyes, two ears, mouth, two openings of the genitals, the Brahmarandhra (in the crown of the head).

The system of channels.

All bodies, male and female, reside in perfect harmony with the Universe and are considered to be a copy of the Universe. This is the brief overview of the origin and structure of the universe, that is given by Guru Gorakshanath and other yogis, based on systematic experience and comprehension of higher forms of knowledge about the universe. The culmination of this experience is the knowledge of the subtle body and the elements of the universe, from which all is woven. This knowledgecan not be obtained otherwise than through direct experience. This is the path going through asana, pranayama, mudra, bandha and other more subtle forms of yogic sadhana, such as pratyahara, dharana, dhyana and samadhi. It is these forms of sadhana that reveal to us the knowledge of the Universe, the planets, stars, life forms, deities and other subtle fabrics of the Cosmos.