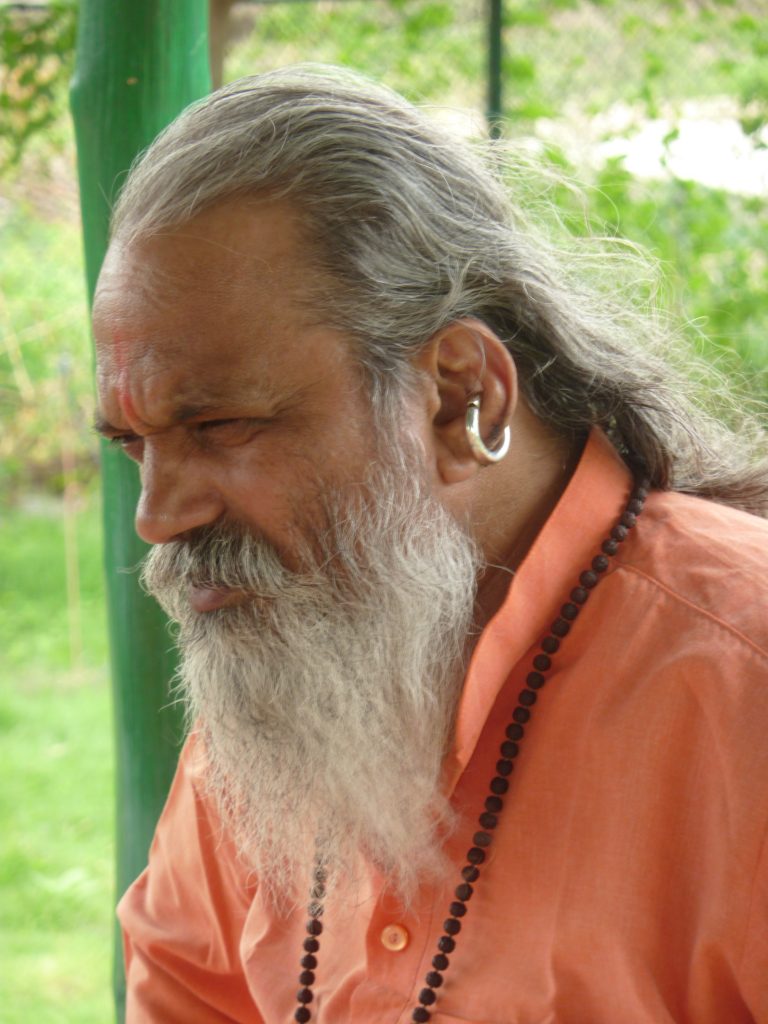 Yogi Vilasnath ji Maharaj (born 19 September 1957) is a Guru of Natha Tradition, who is making efforts for the development and spreading of tradition in India and abroad. Yogi Vilasnath ji Maharaj is the main successor of Shri Baba Anandanath Maharaj who was a Mahamantri in Nath Tradition. In 2012 during the Great Ceremony of Shankhadhaal for his Guruji Anandanath Maharaj, Yogi Vilasnath ji was also appointed Mahant of Om Shiv Goraksha Panchayatan Mandir in Galane, Maharashtra. Yogi Vilasnath ji Maharaj is a member of «Akhil Bharatvarshiya Avadhut Bhesh Barah Panth Yogi Mahasabha» (the organization of 12 Panthas), where he is engaged in the development and distribution of tradition (Prachar Prasar Adeksha). He is known in the Tradition owing to his extensive knowledge, his books and paintings. Yogi Vilasnath had been next to his Guru for over 20 years and has written many books on nath’s practices. He is the author of Shri Nath Rahasya, Shri Goraksha Chalisa and Shri Natha Siddha Kawacha.

Yogi Vilasnath was born on 19 September 1957 in Nashik, Maharashtra in India. His father’s name is Mr. Shankar Rao Kapile, and his mother’s name is Mrs. Vatsaladevi S. Kapile. Yogi Vilasnath was educated on B.Sc. with Physics in 1979 in Bytco college (Nasik) of University of Pune. After that he worked as Supervisor in Pharma Synthechemical Factory, Nashik, from 1981 to 1984 and as Shift Supervisor in FFC LTD, Nashik, from 1984 to 1991. During the Kumbh Mela in 1991 Yogi Vilasnath was initiated in Nath Sampradaya by his Guru Yogi Anandanathji Maharaj and moved to the Guru Gorakshnath Mandir, Haridwar, as a Nath Yogi of Ai-Panth.

During his long life near Guruji, among Nath-yogis and sadhus, traveling over all India, Yogi Vilasnath had great experience in perceiving of Atman and Paramatman, supreme knowledge, in meditation on the different forms of God and Goddess. He also had experience in samadhi in different condition like in water, wine, ground, on the trees etc. These were the milestones or foundation towards Vilanathji’s way to Moksha. During his spirit journey, Yogi Vilasnath had discovered Author, Painter & great Orator inside him. He wrote many books. He went on to draw many wall paintings at Galana, (Malegaon) Maharashtra at his Guruji’s Ashram and also at Guru Gorakshnath Temple Haridwar. Haridwar is also the place where Nath Sampradaya is having its strong presence and is ever expanding. Haridwar itself is a place having long history, it is place where King Bhartrihari meditated at the place where now a huge and famous temple of Guru Gorakshanath is standing. For a long time Yogi Vilasnath was the Main Pujari in this Mandir.

In 2007 he also visited mount Omkar Parvat in Nepal. During his stay there Yogi Vilasnath ji Maharaj made a spiritual research about nature of the sacred bīja “AUM” and its relation with three gunas of Sattva, Rajas and Tamas. Later in 2010 this research was resulted in his book “Shri Nath Siddho Ki Om-kar Siddhi”.

In 2016 and 2017 Yogi Vilasnath ji Maharaj was invited to Poland and Ukraine respectively for International Yoga Day on 21 June. He held a number of satsangs, guided Hatha Yoga classes and spiritual practices, performed homa rituals and gave dikshas for his disciples. During his stay in Ukraine he made a research about relationship between old pagan religions of the region and Aryan Sanskruti of India.

In 2018 on the occasion of International Yoga Day on 21 June 2018, a district level seminar was organized at Panchayat Bhawan, Bhiwani, Haryana (India) courtesy of the District Administration and AYUSH Department in which Yogi Vilassnathji Maharaj was invited as chief guest.

In 2019 Yogi Vilasnath ji Maharaj was invited to Italy at Kalimata Mandir Rome for International yoga day (21st June 2019 ). He held number of satsang, guided Hatha yoga classes and spiritual practice, performed homa ritual and gave dikshas for his disciples .During his stay he was also invited to Durga Mata Mandir Lavinio, Terracina,(Rome), for Yoga Function.